The Altmühltal Nature Park right in heart of Bavaria is one of Germany’s largest nature parks (3,000 km2 in area) and is rich in eye-pleasing river landscapes, bizarre rock formations and juniper heathlands.

Outdoor activities are in the limelight here. Come and hike on the family-friendly biking trail Altmühltal-Radweg (166 km), which is a classic among German cycle paths. Or discover the Park’s unique nature landscape by hiking along the Altmühltal-Panoramaweg, Germany’s most popular Hiking Trail of the Year in 2012. Of course you can also paddle on the gently meandering Altmühl river, which is ideal for a stress-free Summer holiday.

The Altmühltal Nature Park is rich in treasures of culture, such as mighty castles and magnificent palaces, monasteries and splendid churches. It also hosts a fascinating legacy of the Roman Empire: Roman farms, castells and watchtowers have been conserved or rebuilt near the Limes (UNESCO World Heritage Site), the ancient Roman Empire’s border wall. Moreover the Park’s limestone quarries for fossil hunting and its fossil museums take you further back in time to a wonderful world in stone you can explore among rare exhibits from the Jurassic and an outstanding fossil highlight: the few ancestral birds Archaeopteryx have never been found anywhere else in the world.

In the Altmühltal Nature Park the interplay of culture and nature finds its best expression in the Donaudurchbruch rock gorge: this wonder of nature is one of the 100 most beautiful Bavaria’s geotops and can be best admired on board of the ships sailing to Kloster Weltenburg, an ancient Bavarian abbey with the oldest monastery brewery in the world. 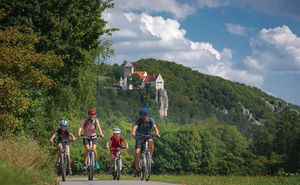